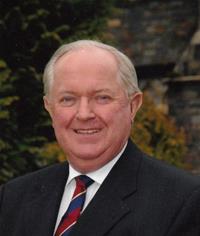 Hugh Thomas, a retired Solicitor, pursued a Local Government career for forty years culminating in his being Chief Executive of Mid Glamorgan County Council (the largest local authority in Wales) for fifteen years.  During this time he served as Clerk to the South Wales Police Authority and Honorary Secretary of the Assembly of Welsh Counties.  He retired in 1995.

He has since chaired a number of public bodies and national voluntary organisations including those in the health and higher education sectors. He was Vice Chairman and Chair of the Audit Committee of the Wales Centre for Health.   He was also a non-Executive Director of Welsh Water.

Currently, he is Chair of the Regulatory Board for Wales and one of fifteen trustees of The National Library of Wales.

Hugh was appointed as an Independent Member of the Standard and Ethics Committee on 28 July 2014 and the Audit Committee on 1 August 2014.